Motto: If it moves measure it. If it doesn't, measure it anyway.

Chris N French (N is for Nothing as for G in Edward G Robinson. If you have searched the Web you would know how important it is to distinguish amongst the zillions of Chris French's out there, some of them also psychologists. Or for Norman!) was born in the Garden City of Letchworth, Hertfordshire, England during the war where his earliest memory used to be of sitting on an ants' nest but he has forgotten that. Now he can just remember leaving Letchworth soon after the war, aged three, with tears in his eyes as his family had not consulted him on the move ... typical! He then spent his early years in the borough of Southend-on-Sea (longest pleasure pier in the World), Essex.

This Jesuit quote "Give me the child till the age of seven and I will show you the man" is attributed to St Ignatius of Loyola or St Francis Xaviers, obviously an early psychologist who wasn't interested in women. Two thousand four hundred years ago Aristotle laid an emphasis on seven year periods. Clearly the die was set before the following photos, as meetings with fellow students over 50 years later has demonstrated. 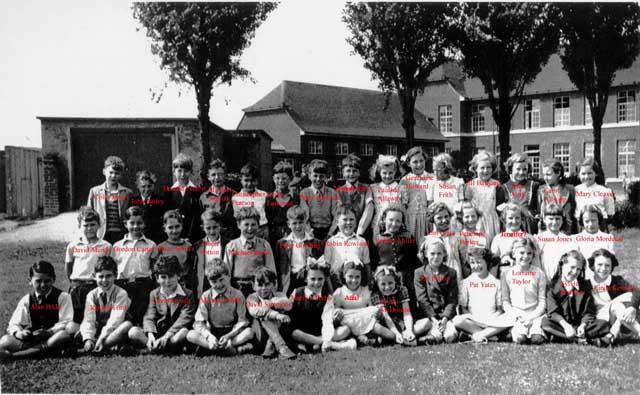 Please note the Unknowns above. Email me with corrections or additions to the names. Below is a plan from the class of Miss Murphy or Mr Spurling (1951 to 1954). Do you know which? 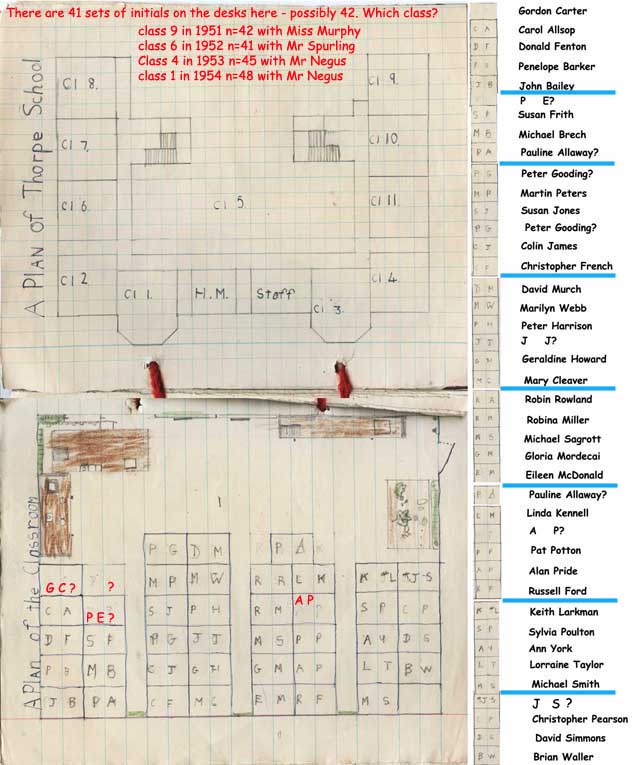 And 7 years at Westcliff High School for Boys (see below)

(click on above image for enlarged - 0.9 MB JPG photo - view of the 901 boys plus their teachers in 1960) where he learned how to avoid rugby and cold baths) 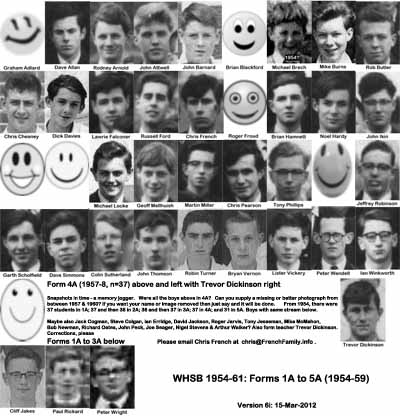 (Click on above image for enlarged view of boys who were in Forms 1A to 5A:

in 1957/8, when began his life-time reading of Time magazine, New Scientist and - prompted by Trevor Dickinson - the then-Manchester Grauniad,

From October 1961 (the same month that Private Eye began publishing) he spent two years in London at UCL struggling with the boredom of a civil engineering degree - "cement, sewers & surveying" - while pondering his ethics and extending his isms from scepticism, pacifism, empiricism, environmentalism & behaviourism (reading Bertrand Russell, Gilbert Ryle, Karl Popper & B F Skinner), atheism, humanism, rationalism and secularism to anarchism with Donald RooUm & Irene Brown and Jeremy Bentham's utilitarianism - along with the odd demo.

In 1963 he dumped engineering and moved to Scotland, spending three years at Aberdeen University leading to a first class honours MA degree in psychology (and handling 5-hole computer tape on an Elliott 803);

From 1970 until 1993 he was a Lecturer in Optometry at the University of Manchester Institute of Science & Technology (previously the Mechanics Institute, now merged with Manchester University) teaching psychology, computing and statistics and published a little over 50 articles on subjects ranging from the need for visual health care, professional manpower planning, perception and art to computer software, while struggling with administration - selecting undergraduates, optimising computer facilities (from 80-column cards on the ICL 1905F to networking) and you name it. Above, Chris in 1971 during those black and white days at the mighty $27,900, 8K core memory with 1.6 microsecond cycle time 12-bit processor, DEC (Digital Equipment Corporation) PDP-12A before he lost his hair, cycling to work at Umist before environmental issues came to the fore and demonstrating a new move at Umist during his dancing years.

Much has changed in UK universities since the 1980s with a huge increase in student numbers but some of the games played in the selection process remain the same.

In 1971 he began using computers to measure visual performance culminating in the French Letters PC (MS/DOS) software, launched commercially in 1993 as the Umist Eye System (UES) and still in use today in optometry practices round the world on PCs introduced over 28 years, from 1982 to 2010, from antiquarian DOS-only 6MHz 80286s to modern 2GHz plus machines running Windows 7. Although it only likes 640x480 & 1024x768 displays, modern widescreen laptops need not be an obstacle and with some - like the £200 2010 (1024x600 WSVGA) XP Dell Inspiron Mini 1012 - the UES can be run in 1024x768 on a standard 4:3 aspect ratio external monitor without distortion. (Other aspect ratios will distort a few of the minor displays.) This can be under Windows XP or - better - directly in MS/DOS only, using a boot-able USB flash-drive. Above, Chris tweaking the UES in Sally's practice back in 1991, stripes courtesy of a then ailing Canon Ion/Xapshot RC-250 analog camera, precursor of today's consumer digital cameras

Life's a jigsaw - some cultural recollections:

Today he works part-time for Sally French-Teeling Ltd which was established in 1990. In 1993 he had taken early retirement and became an Honorary Lecturer in order to gain more time to look after his three young children ...

... their three young pets, half a dozen old computers, some computer programs including UES, and a house and small jungle - thus enabling his relatively young but long-suffering wife Sally to work even harder as an optometrist in her own practice in Cheadle, Cheshire. Chris launched this web site in 1995 and plunged into genealogy in 1996.

According to the family, his main hobby is finding other things to do rather than tackle any urgent domestic chores. He still has very little spare time but can sometimes be found relaxing in front of a computer or TV. Favourite programmes have included Whirligig, I Love Lucy, Mash, The Rockford Files, The Raccoons, Columbo, Monk, ER, House, Mad Men, Ugly Betty and The Daily Show.

serving on the committee and editing newsletters

The committee years, with apologies to Allan Ahlberg


but gave it up in 2005 to catch up on a number of domestic matters. Even when you are semi-retired, shortage of time is a problem. Theme song ought to be "Busy doing nothing", certainly"busy" but it all depends upon what you mean by "nothing". When he had time, he used to write educational software for his children.

but now in - association with his sister - indulges his passion for genealogy.

These days his over-filled teeth (courtesy of the NHS of the 50s & 60s) are maintained by the gentle Greg Marshall and his general health managed by the ever-patient Stephen Gaduzo. He had his prostate removed in 2004 by the brilliant Patrick O'Reilly, his hypertension sorted in 2006 by the superb Philip Lewis and his colon depolyped by the marvellous Brian Saunders. Excellent web sites include Dr Catalona's in the US for prostates (Dr Catalona recommends establishing a baseline PSA for men at age 40 which seems very sensible to me) and the British Hypertension Society for hypertension. 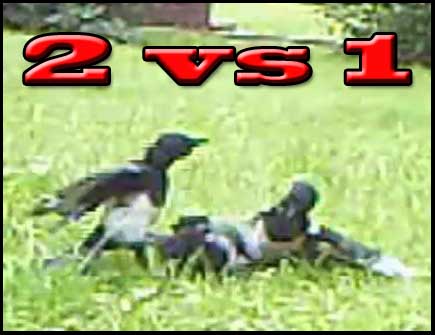 This video shows two magpies 'ganging up' on a third.

Back in 1965, Travis Thompson and Thomas Sturm showed that "stimuli evoking unlearned aggressive behaviour can be used to reinforce operant responses" in male Siamese Fighting Fish. Put less technically, the sight of another fighting fish would act as a reward and condition behaviour despite the fact that such behaviour in the wild could lead to death.

Some time ago we noticed this loud banging sound in the house but it was a while before we discovered that it was a magpie hitting a window. This window doesn’t have curtains. Instead it is covered with mylar film creating a one way mirror. You can see out of the window but anyone looking in will only see their own reflection. This is what the magpie was seeing. It ‘thought’ this other bird had invaded its territory so it was attacking it, but in fact it was its own reflection - magpies like other birds can’t tell the difference. After first noticing the other bird by chance, it had been conditioned to fly up to this window sill every day to attack its own image. The same phenomenon that Thompson and Sturm had first noticed 50 years ago in fish.

Manything recordings have shown that this happens on average 6 times a day for a total time of around 5 minutes although on a fine day it can happen a dozen times. This particular video is from 1:08pm on 10th March 2016. In October 2016 our magpie finally 'killed' its rival as the photo of our broken window shows. Bird attacks on car wing mirrors are familiar to motorists and if you park your car in the same place you might expect a similar build up in attacks although maybe an attack from a large bird like a magpie would require very large car mirror and you won't be there to record them.

Birdfeeders for small birds aim to stop squirrels and large birds getting at the seed. Annoyingly they don't stop either from frightening the small birds away and stealing the 'crumbs' left in the bottom of the feeder. This 2016 video shows two clips side-by-side, comparing footage from a discarded (2012) iPhone 4S running the free manything app with that from an old 2011 Bushnell Trophy Cam Trail Camera.

The radial chart to the left shows the birdseed consumption through one 12 month period in our garden with this feeder - roughly 45 kg all told. The amount of seed consumed is proportional to the coloured area - see accompanying scale. I was curious as I hadn't been able to find any figures online of how it varied over a year. Of course, this may be unrepresentative of other gardens. Seeds spilled on the ground by the wasteful small birds were picked up by squirrels and the larger birds. The pigeons were particularly persistent, constantly circling beneath the feeder picking up seed and while they tidied up the mess with one end of their anatomy they made more mess with the other end. That was until November 2016 when at least two were predated by a kestrel. Pigeons haven't been back since - well not up to the time that this was written. 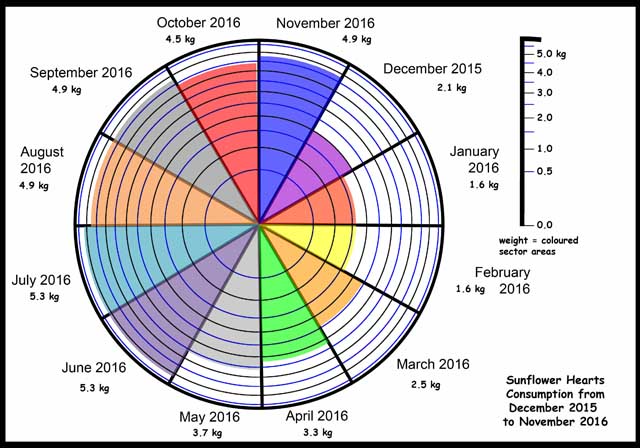 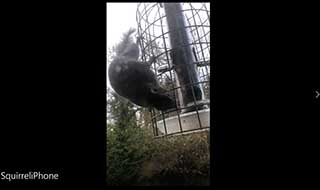 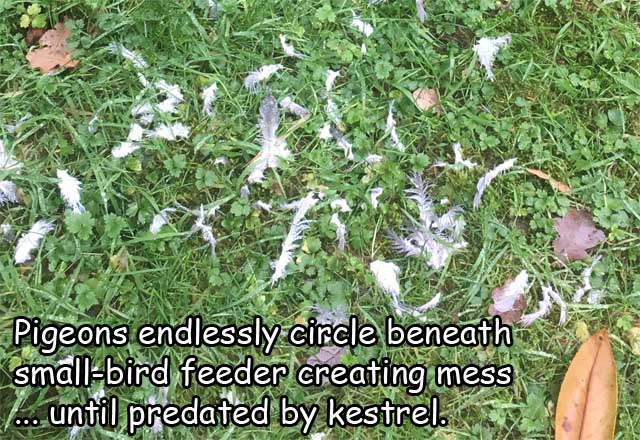 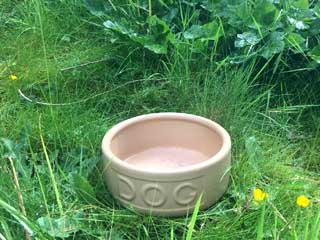 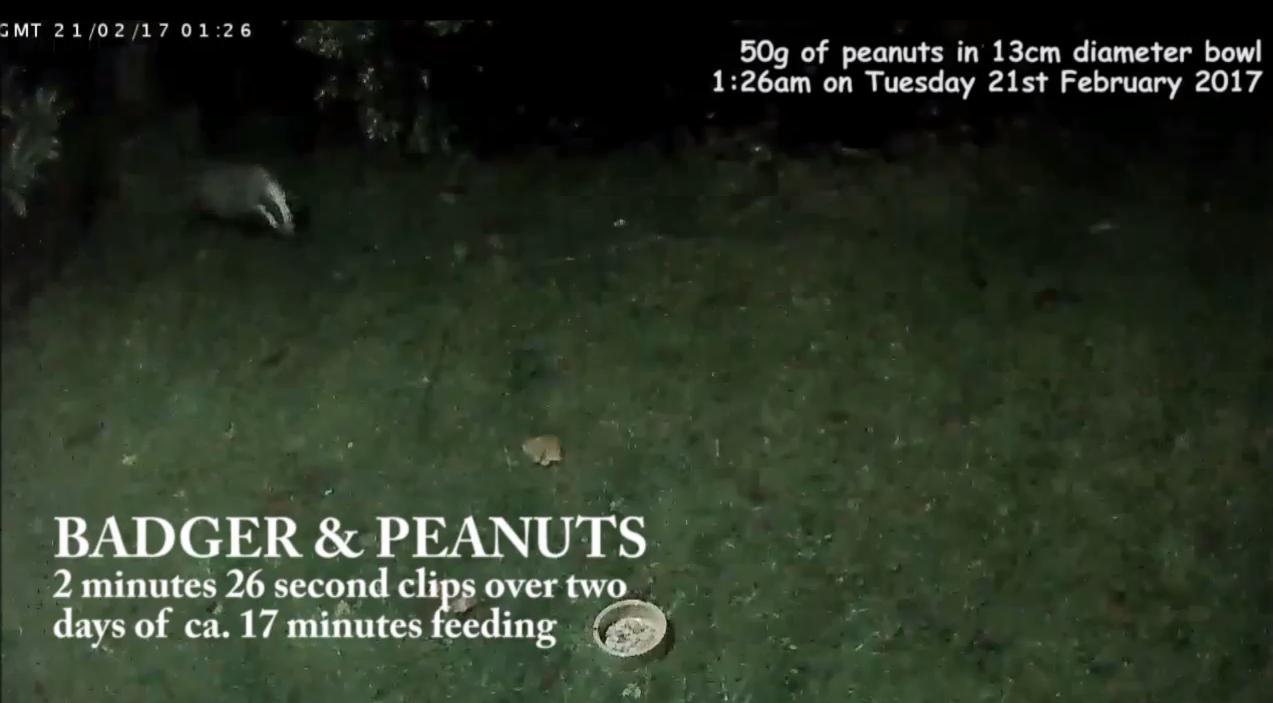 The Hedgehog, the Fox & the Peanuts (click below, 39 seconds) 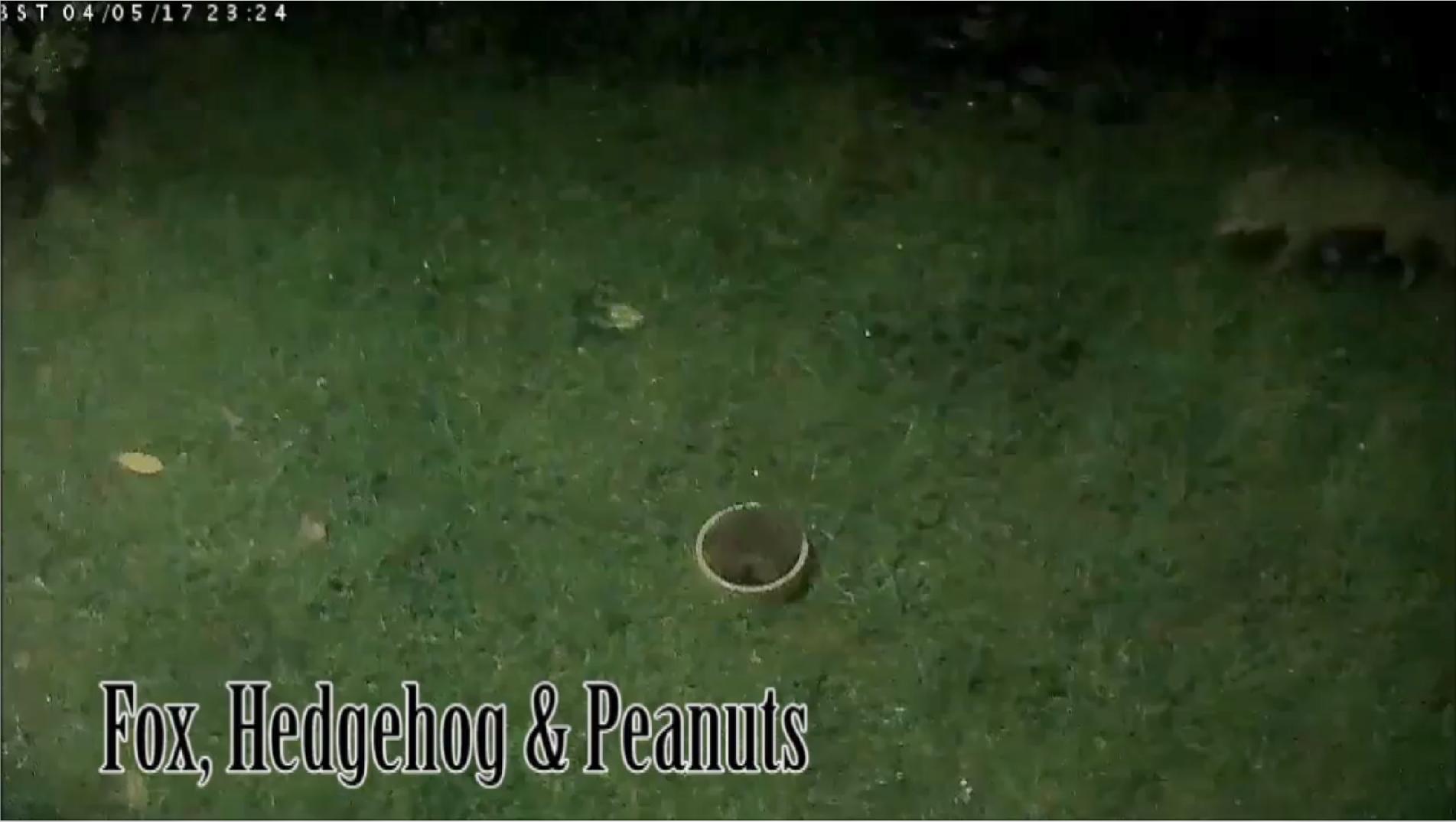 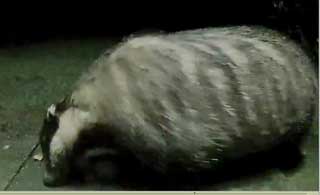 Mouse Repatriation - but does it end well?(click below, 2min 8 sec) 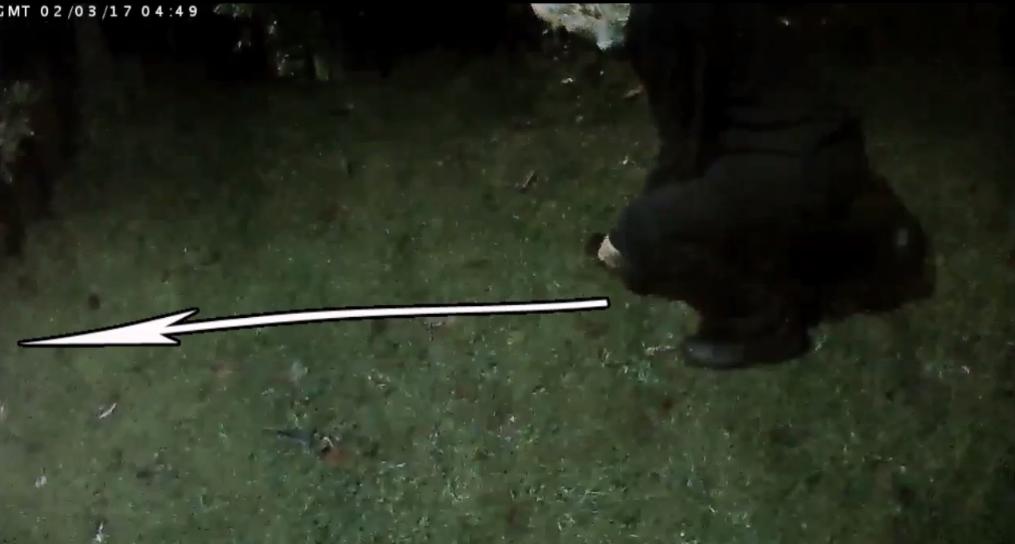 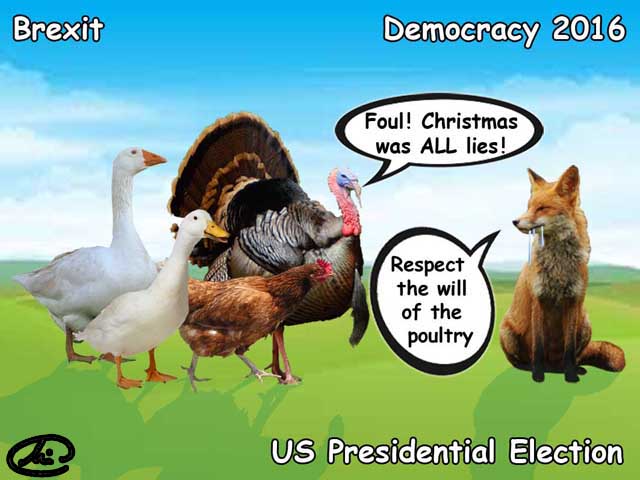 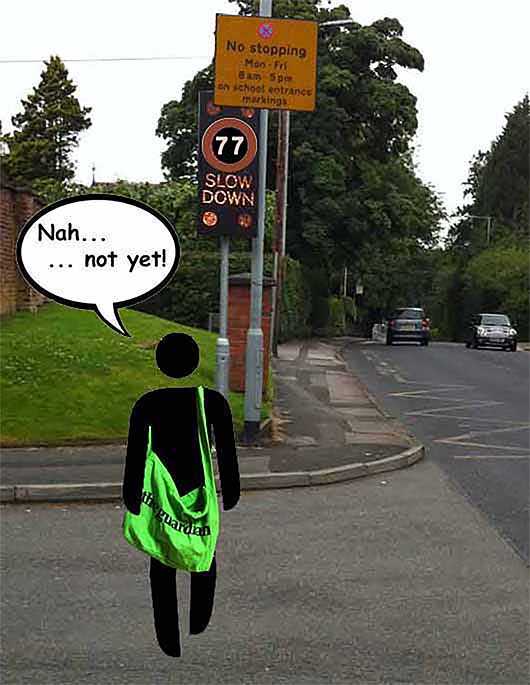 If this page has been reached directly, then clicking on HOME above will also restore the frame and left index. Then a click on "FrenchFamily" will enable the top links to our other Family pages.