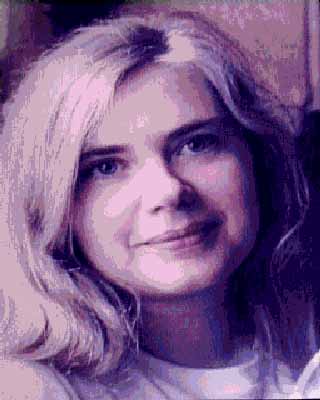 Above, Sally when she was a little younger.

Sally was born in Norfolk, a 50s child. She went to school in Kings Lynn, and worked as a petrol pump attendant, an electronic assembly worker and receptionist in an optician's before entering UMIST (now Manchester University) where she gained an upper second BSc honours degree in ophthalmic optics (today known as optometry) in 1976, and qualifying with the British Optical Association in 1977, now a fellow of the (renamed) British College of Optometrists, FBCO.

Since graduating she has worked as an optometrist in South Manchester - for ten of those years as a managing ophthalmic optician for Dollond & Aitchison - during which time she supervised a number of pre-registration optometrists and correspondence course DOs. During the 80s she taught part-time at UMIST - first dispensing and then contact lens practice and from 1986 for a number of years was an examiner with the British College of Optometrists in dispensing; case records and practice law; and contact lens practice. From time to time she has participated in schools' career seminars and regularly shown local primary school children round her practice.

In 1978 she set up home with her husband, Chris, in Cheadle and opened her own practice in the village there in 1990.

Her interests include music and singing (Guildhall School of Music and Drama - Grade 6!) although these had to make way for her career and three young children. 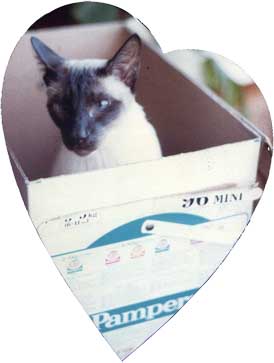 Zeus was a very special pussy and Siamese. His vet rated him "five stars" for ferociousness but to the family he was just "a pussy cat". Born in 1981, Zeus died sadly in January 1998. He wasn't very good with adult strangers. We blame a plumber back in 1983. Shortly afterwards he first showed his claws to Chris's first wife. But he loved all children. We all miss him.

If this page has been reached directly, then clicking on HOME above will also restore the frame and left index. Then a click on "FrenchFamily" will enable the top links to our other Family pages.